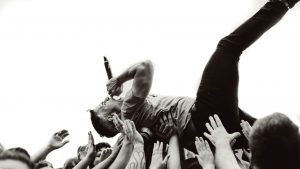 Hi, I’m Sarah. I absolved the preperatory course ‘Filmscoring and Production’ at Musicube Academy and now I am a second year student of Composition for Film and Theatre. In this blog I’m gonna share my personal experience as a student at ArtEZ in Arnhem.

Right now we’re in the middle of a project called band in Residence. This is a project where a (more or less) famous/professional band comes to ArtEZ and coaches other bands. The type of band varies a lot every year from Jazz to Rock and Pop. The bands are also quite international so bands like Omer Klein Trio from Israel or even Snarky Puppy from the United States visited ArtEZ for this project.

This year the Dutch band De Staat from our neighbor city Nijmegen payed us a visit. After a first introduction we had the honor to attend some masterclasses with one of three of the band members.

Before that I didn’t know a lot about the band and their concept of working really surprised me. The head of this band is Torre, and he started this band as a one-man-project. He recorded and wrote everything himself. The band members stated that he is the creative brain behind all the songs without even actually playing in the band.

So basically, what he does is to produce Demos of his songs and to make the band play his demos to record it then. Of course, they also change some things but most of the time they’re trying to reproduce, the sounds he created using plugins, with their real instruments (a lot of effect pedals are involved too).

Another completely new approach of creating music was for me that Torre is quite a rational guy. His music is more based on concepts than on messages. The lyrics and the vocals always come last in the creative process and he usually starts with combining weird instruments or sounds.

The band seemed fearless to do things that are not commonly known in this genre and they stated themselves they do not have a ‘taste police’. So, their songs usually sound quite unique and often have some nice surprises in there.

Musically their songs are mostly built on quite simple rhythms or just some small fractures but sound wise they experiment a lot. Sometimes a piece has the same groove throughout the song but with adding and taking away stuff they still keep it alive.

For the project the whole first and second year of Jazz&Pop students at ArtEZ has to form bands. Each band has to cover one song of the Band in Residence and create one in the style of the band. This year we (the second-year composers) joined a few first-year composers to form a band. For a lot of composers, it is quite challenging to play in a band cause we’re mostly not instrumentalists, but we also have the option to produce or remix some songs.

During this three-day project we get several coaching’s from the band members of De Staat and a lot of rehearsal time. On the last day there will be a big concert and every band will perform their two songs. To be honest I was not really happy to do this project and I’m still not completely motivated to put a lot of effort in it but I’m excited to hear what the other bands did and to learn about these bands is definitely worth it as well.

All the best,
Sarah